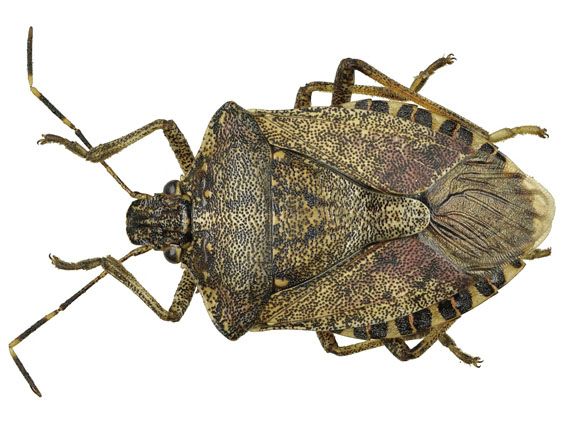 A small shield bug, which is most easily recognised by its large size of roughly 14 – 17mm – the size of a New Zealand 10 cent piece. Native to Asia and found in Korea and Japan, it has also invaded the USA, Chile, Switzerland and 14 other countries in Europe.

The stink bugs have shield-like bodies that are mottled brown with white banding on the antennae and alternating light/dark bands on the outer edge of the abdomen.

The stink bugs lay their pale-green to white coloured eggs in groups of approx 25, and the nymphs can be found on the undersides of leaves. Nymphs look different to the adults and are brightly coloured with banded legs of white and black, with an orange underbelly with black stripes, and reddish eyes.

The BMSB are found to favour over 200 types of plants including kiwifruit. Both adults and nymphs suck the sap of young foliage and vine growth, as well as the fruit. Signs of attack include black spots and blue-grey scarring on fruit, deformation of young fruit and fruit drop. Affected fruit turn white, spongy, and eventually rot.

Infestations of the BMSB in other countries that grow kiwifruit have seen a 30% loss of fruit production, which will be devastating to our own orchards if the bug becomes established. They are also known to infect crops of apples, citrus, stone fruit, corn and other valuable crops.

They are known to be a household nuisance, gathering in large numbers in homes in winter where they are unsightly and smelly, releasing a pungent odour when sprayed or squashed making them hard to remove.
Eradication of the BMSB is difficult and early detection is crucial for it to succeed. Traps are used for monitoring but are not suitable for a surveillance network for early detection.

The risk of this pest entering New Zealand is now extreme so be vigilant in keeping an eye out for the bug, especially if you have visited one of the affected countries in the last two weeks. Check your luggage carefully in a closed room in case one has hitched a ride.
Also, check all Items that are sent or imported overseas as they could be hiding in these as well.
If spotted, catch it in a see-through jar, take a picture and immediately contact
MPI on 0800-809966.

For more information, go to the MPI website:
https://www.mpi.govt.nz/protection-and-response/responding/alerts/brown-marmorated-stink-bug/